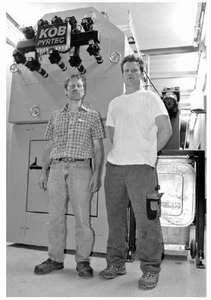 The Kalamalka Research Station is going green, and it is using a fairly familiar natural resource to do it.

Back in January, B.C.s Ministry of Forests replaced the research stations natural gas heating system with a wood pellet boiler/solar panel combination, and Mark Griffin, the ministrys manager of research stations, says the results have been inspiring.

Griffin estimates the research station previously consumed $16,000 annually in natural gas to heat the facility. He believes the biomass boiler could reduce that figure by up to $10,000, depending on how well the solar panels function in winter.

The big random element is solar power, and how much energy were going to get from the solar panels, said Griffin, whose background is greenhouse horticulture.

So far, the stations $1,300 monthly gas bill has been reduced to a paltry $175. That figure is offset by the consumption of $3,000 in pellets since the boiler came online in January, which is still a significant savings.

The idea for all this came about when the ministry held a contest challenging its employees to devise alternative energy programs that would reduce greenhouse gas emissions.

More than 400 ideas were submitted, with Ted Traer, a woodlot forester in the Quesnel district, winning with his Energy Cabin proposal. His design comprised a heating system powered by both solar panels and a wood pellet boiler.

After looking at the ministrys potential facilities, it was decided the Kalamalka Research Station would be an ideal candidate.

As a research station, were continually used as a proving ground for new ideas. Were happy to oblige, grinned Griffin.

After a request for proposals was tendered, Enderbys Burkhard Fink, owner of Fink Machine Inc., was awarded the contract.

The Austrian-born Fink, a machinist by trade, has been involved in the bio-energy field for 10 years. He says timber-rich B.C. is ideally situated to begin replacing gas- and oil-powered furnaces with high-efficiency wood boilers.

I refused to consume gas when we have so much wood around, said Fink, of when he first began operating in B.C.

It was an economic-driven decision back then… but the environmental aspects are being heard more in the public now.

We also keep the wealth locally. We use local labour to harvest the local fuel instead of importing fuel. Its creating jobs all around.

The Kal research station had to look no further than Armstrongs Pinnacle Pellets for a steady fuel source for its wood boiler. The solar panels were supplied by Swiss Solar Tech in Kelowna.

We are proud of the fact that we were able to use a B.C.-based support system, said Griffin. Its a real plus for us.

We see it as a way of supporting our emerging bio-energy field.

Fink, who has five employees in Enderby, noted that while bio-energy projects have yet to catch on in the Okanagan, there will likely be more on the way as governments look to tighten greenhouse gas regulations and reduce fossil fuel consumption.

The environmental impact is a lot lower and gentler with clean burning wood boilers than with fossil fuel equipment, said Fink, adding that modern wood boilers are just as efficient as natural gas furnaces.

The perception is out there that wood burning equipment is dirty and not environmentally friendly. That can be true if its old technology, but new technology thats in Europe… is so clean burning you cannot visibly see the emissions.

As an example, a school in P.E.I. that consumed 100,000 litres of natural gas annually converted to one of Finks wood boilers. Greenhouse gas emissions were reduced by 296 tons annually, which equals the amount produced by 54 passenger vehicles.

The research stations wood pellet boiler has already consumed an estimated 30 metric tons of fuel, yet Griffin says they have ended up with just one wheel barrel full of ash as a by-product.

Once he (Fink) got the machine tricked out, we were seeing very efficient combustion, said Griffin. This boiler is extremely efficient.

It was impressive to see how little ash was produced.

While the wood boiler and solar panels currently arent much use in summer, Griffin says there is potential to run the facilitys hot water off the panels.

In summer, the challenge is to radiate all that heat the panels collect. Were still in the incipient stages of this.

Griffin explains future alternative energy projects could include the ministrys fire bases. With no gas lines to these remote locations, diesel and propane need to be hauled in to keep them running. Griffin says a wood boiler/solar panel combination could be an ideal solution.