When the Harney County District Hospital Board sought to construct a new facility, they wanted to save on energy costs, but they also wished to support the woods products industry in the region. The case of the Harney County District Hospital illustrates how local knowledge and a motivated “champion” are important ingredients in implementing a woody biomass heat project. While it’s a common assumption that renewable technologies usually rely on tax breaks, low interest loans or other subsidies to stay in the black, this case study shows at least one example of how biomass can compete with other energy sources on a level playing field.

The wood products industry has had a long history in Harney County. Back in 1920, the Hines Lumber Company established a mill that was the major employer in the area for several decades until it closed in the 1980s. When it was time to build a new facility for the Harney District Hospital to replace the aging building constructed in 1950, the hospital’s administration and district board saw an opportunity to honor the area’s heritage through woody biomass utilization. They also sought to support an industry they thought might one day revive. Concerns about sustainability, climate change and the growing recognition that humancaused carbon emissions are a factor, were also considerations in the decision to investigate woody biomass utilization. Jim Bishop, the hospital’s CEO, had previously worked locally as an engineer in the woods products industry.

Other members of the hospital’s board had also worked in the industry. Together, their experience was pivotal in turning their idea into a reality. Had they not been familiar with the business, there would have been a much steeper learning curve to understanding the tradeoffs associated with different types of fuel, markets, and supply sources. Another important factor in this story was the relationship between Jim Bishop and U.S. Forest Service Forest Products Utilization and Marketing Specialist Larry Swan. Jim and Larry had worked together previously, so it was natural for Jim to turn to Larry for information about woody biomass. Larry was a critical resource for information about woody biomass technology, wood pellets, and comparable projects that had been implemented in Europe. 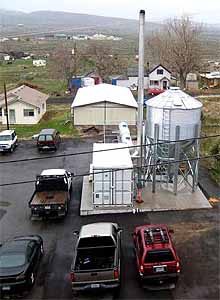 With the information that Larry provided, Jim did his own calculations to figure out if woody biomass might be competitive with other fuel sources to heat the new facility. He calculated that wood pellets could be cheaper in the long run compared to oil, propane and electricity. When he approached the architect and the contractor on the project, they were skeptical. Jim persisted and convinced the architect to do a feasibility study. Those calculations predicted a 15-18-year payback, but didn’t include the state energy tax credit and were based on oil prices at the time. The findings from the feasibility study weren’t sufficient to sway the architect. So it was up to the board, which made an executive decision to put a wood pellet boiler in the plans just 45 days prior to ground breaking.

The entire system, including storage silo, occupies a total of four parking spaces.

Once the decision was made, the architect and contractor followed through and put together a design that everyone was pleased with. Since then, oil prices have increased substantially, reducing the expected payback period to 3 years. Since a woody biomass heat system was not part of the original design, propane and electricity are used in some parts of the facility that could have been served by heat exchangers off of the main heat system. For example, propane is used for laundry facilities, heated sidewalks and garage space. (In addition, propane heat is available as a backup to the biomass system).

Had these systems been integrated, Jim anticipates that there could have been even greater overall energy savings. The 55,000-square-foot facility has annual total energy expenses at: $30,000 for propane, $77,000 for electricity and $10,000 for wood pellets. The hospital board considered both wood chips and wood pellets when trying to decide on a fuel source. According to Jim, the benefits of wood pellets outweigh the higher cost of the fuel for all but the largest facilities or large scale uses like power plants. Compared to wood chips, pellet systems don’t require as much space for storage and for the equipment to deliver the fuel to the boiler.

The board was also concerned about finding a reliable chip source that could provide consistent, quality chips. Poor quality chips and inconsistent chips can result in higher maintenance costs than anticipated. Third, the board wanted to ensure that the facility would be able to obtain fuel stocks from multiple sources and not rely on the capacity of any one supplier. The hospital uses at most 100 tons of pellets per year that they obtain from Bear Mountain Forest Products, which has pellet plants in Cascade Locks and Brownsville, Oregon.

Truck deliveries occur about once every six months to refill a storage silo that measures just 12 feet in diameter by 15 feet high. The system is highly automated, requiring very little maintenance. Each day, a staff person takes a few minutes to check on the system to make sure it is running smoothly. The system generates about 30 gallons of ash every 2–3 weeks that is typically given to people in the community to use as a soil supplement. The new hospital was financed through a combination of Medicare reimbursements, a USDA loan, and financing from local banks. But no special financial incentives tied to the use of renewable energy were factored into the feasibility analysis; proof positive that woody biomass can be a sound economic decision even without state or federal subsidies.

However, the hospital finally did apply for and receive a tax waiver from the state amounting to an additional $80,000 of additional savings. The simple fact that woody biomass was the sensible economic choice was the key to community support. Jim speculates that there might have been community resistance if the hospital was incurring additional expense only to meet environmental concerns. “Out here in Harney County, folks are just happy that we’re using wood and saving money,” Jim said.

No incentives specific to biomass utilization factored into the original feasibility assessment. However, the hospital received the BETC tax credit after the project was completed for an additional $80,000 in savings.